The reviews are in!   Here's what our classmates had to say about our 40 year reunion:

Our night together truly and factually was perfect. Many thanks to you and our AllStars. I had sooo much fun, everyone did. I laughed and was engaged in conversation from the moment I arrived in the hotel lobby until we all departed from Booms some nine hours later! So as we say in the aquarium business..."tank" you,

It was a lovely time. Thanks for all of the hard work to make this happen!! I feel young again after being reminded of old times, good friends and carefree days:)

I am so grateful that I have had the opportunity to remember the good people with whom I shared my youth. Fond friends, lost loves and sweet memories filled my mind and heart. Thanks to those dedicated folks who made this event happen.

What a great bunch of classmates! I had such a wonderful time catching up with so many great people.

Still smiling..such a fantastic weekend with all of you!

There are no words to describe the weekend I am so happy I was there!!!

For anyone who did not attend, you missed a great time! Even if you never associated with ANYONE in high school, put aside your preconceived notions aside and come next time and just have some fun with some of the greatest people you ever met! Make an effort and everyone else will too! Life's too short

Almost did not go. Very glad I did. Hearing about everyone's journey through life very cool. John and the whole committee great job! Let's do it again!"

SENSATIONAL!!! You guys did an amazing job. I keep thinking...if you build it they will come. Well, you did and they did.
Bob Z. and Liz were wonderful and made it look so easy.Thanks for all of your hard work.It was so nice seeing old friends and reminiscing. Just a perfect weekend all around.

Had a great time at the reunion. Lots of fun seeing old friends. A big thanks to all that put this event together. You guys and gals did an amazing job. Can't wait to see the pics

Here's to our team of allstars, our reunion committee, who made the best reunion ever happen!  In more or less random order: 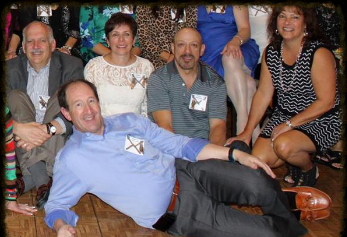 Bob "Bee Z" Zorowitz was late to the game, only becoming part of the committee in the late spring.  However, he hit the ground running and was a tremendous help making classmate calls, and contributing his thoughts and beer to the committee meetings.  Bob was a natural for the role of MC, with Liz did an amazingly creative job in writing the script for the evening.  His comedic timing had people laughing even when they didn't understand his jokes.  Wasn't that class schedule that he and Liz put together awesome?  Magnificent, Bob!

Debby Bucky Birrer was the quiet one in our group. People like her are sneaky, in that they get so much done as while they fly under the radar.  Debby took ownership of a job that almost no one likes, handling the finances.  She generously paid for our post office box with her own money, making the visits to and from the post office and the bank and keeping our records for us. Thank you, Debby, for getting a difficult job done and for being a great friend!

Art Stone was the person who found and booked Domani, which was a great start to our reunion weekend.  For those who attended, Domani had great food and was a perfect venue, within walking distance of Lou's Tavern, where many of us wound up Friday evening.  Art made nearly every committee meeting, often travelling an hour from his home to get there. He was often the voice of reason at our meeting, while not speaking often, always offering valuable insight when he did.  Art also worked phones beautifully by being a great communicator and conversationalist.  Great work!

Liz Janssen traveled to the monthly committee meetings in Ridgewood from her home in the Bronx.  However, it was Saturday night that she showed her talents for entertaining the class as reunion MC, and it quickly became apparent that she was made for the part.  She fed off the excitement of the crowd, and the crowd responded in kind.   We all feared that people who haven't seen each other in 40 years would not be attentive to the evenings entertainment, but we happily discovered that fear was unfounded.  Liz' wit and charm, along with Bob's talent and comedic timing, quickly won over the crowd and made the evening a success.  Bravo!

Kathie Schaefer Warner was a major source of energy to our committee with her sense of humor and her willingness to take on the tasks of moving the planning forward.  As a PV mom, Kathie gave us the "inside" on whom to speak with and how to get things done with the school, which was extremely helpful in arranging the tour of the school, coordinating the football game with our reunion, arranging the marquee for our group picture or getting yearbooks from the school we could put in digitize form.  Kathie was a major voice at our meetings and provided valuable input.  Rock on, Kathie!

Lesley Goddin not only had the great idea of putting together the Classmate Profiles for our website, but came up with the creative questions.  Editing, assembling and posting the profiles were not easy tasks, but Lesley accomplished it making it appear effortless.  The Classmate Profiles may have been the most popular feature on the website, and gave some of our classmates who could not appear at the event the opportunity to participate and let their fellow PV grads know what they've been up to.  Her pragmatic observations during our meetings were always welcome.   As GY would say, "Good job!"

Jordan DeFlora provided the soundtrack for both Domani and the main event, setting the mood with the memory inducing songs of the early to mid 70s.  It was amazing how just listening to some of that music could make you feel like you were 17 again, although arthritis, hot flashes and general fatigue may bring you back to reality real quickly..Jordan spent many hours culling through his own music collection not only producing what you heard, but putting together the 12 CD collection that was given away as major awards.  Hats off, Jordan!

Frank Piscopo  Without Frank, this reunion would never had happened.  After all, it was Frank who decided six years ago that, hey, it would be a nice idea for our class to have a 35 year reunion. Drawing on the success we had in 2010 through the project he initiated,  Frank joined our committee for the 40 year reunion early this year and was instrumental in making it even better.  His technical work in setting up the sound and video, not to mention lending his equipment,kept us entertained at both the main event and Domani.  Kudos, Frank!

Kit Villani Argenti did an amazing job with the name tags, showing off her creative talents and ideas.  They were beautiful!  You could thank Kit when you saw a face that you knew was familiar, but couldn't quite recall the name, dropping your eyes casually downward and effortlessly articulating it like a polished screen actor reading from a cue card.  Kit was always there at committee meetings, giving her well reasoned perspective of  the many ideas, good and bad, that were generated there.  Kit, well done!!

Carol Rekow Flach was helpful in doing what needed to get done, particularly in the early stages of our planning.  She helped assemble, fold, stamp and mail many of our mailings as well as contacting some of our long lost classmates to attend the reunion.  Much thanks, Carol!

Bob "Studs" Hubbard was not only our class historian who could provide an oral biography of every classmate, but was a major contributor to our website.  Bob was responsible for the teacher profiles, which, by Jeff Jasper's own exclamation, almost made him pee his pants.  Bob was also instrumental in hunting down many of our lost classmates, principally responsible for locating "Wah!" who was the most difficult classmate to locate..  Bob has probably put in more hours than just about anyone else in planning this reunion, and for that, we are grateful.

Mary Riley Viehoefer (not pictured) spent hours providing us with the fruits of her talents by compiling, editing, and doing what was technologically necessary to digitize the 1974 and 1975 yearbooks and post them on the website.  I felt so guilty after a while as to how much time she was actually spending on the project, along with providing her technical advice for the website.  We were tremendously excited about finding Mary, who was among the most difficult classmates to locate. . . . ever try Googling the name "Mary Riley?"  We were just as much saddened by the fact that due to demands of her career, volunteer work and tending to the needs of her elderly parents half way across the country, she was unable to make her way here from her home in Texas.  Mary, thanks, y'all.

Kerry Fay Craffey while not an official committee member, did great work in contacting classmates and generating interest in the event.  She seems have kept in touch with more people in our class that any other person, and wound up "converting' many of her calls to reunion attendees.